For nearly a century after statehood, Ohio had no legally authorized state flag. The state militia carried regimental colors based on the Stars and Stripes, with the addition of "a large eagle, with the number of the regiment and the prescribed number of stars above". 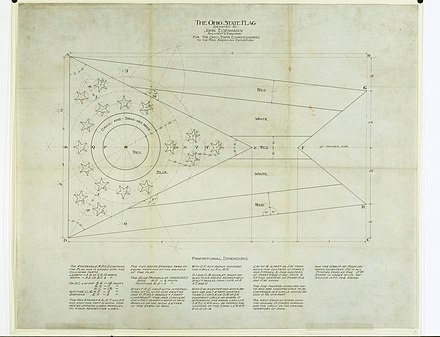 The flag was designed in 1901 by John Eisenmann for the Pan-American Exposition and adopted in 1902. Before that, for nearly a century after statehood, Ohio did not have a legally authorized state flag. One unsuccessful proposal called for a design based on the state seal.

Ohio has adopted an official salute to the flag and the official folding procedure gives it 17 folds. The Ohio flag has influenced a number of logos and municipal flags within the state. A scarlet-colored gubernatorial flag is based on the state seal.

By the early 1850s, Ohio expressed interest in adopting a state flag, as several other states had already done. In late 1860, Qtr. Mr. Gen. David L. Wood and Adj. Gen. Henry B. Carrington devised a flag consisting of the state seal upon a white field. They had it flown above the Ohio State Arsenal in Columbus, in hopes that it might someday become the state flag. On January 17, 1861, at a banquet organized by the Columbus Typographical Union Local #5, future U.S.

President James A. Garfield gave a speech defending the national flag as the only flag Ohio's soldiers would march to battle under. The generals, in attendance, were moved to set aside their proposal and hoist the Stars and Stripes in its place. Later that year, Wood and Carrington joined fellow Ohioans in battle under the 34-star Union flag, which would serve as the inspiration for a state banner decades later.

In 1901, Cleveland architect John Eisenmann was commissioned to design an exhibition hall for his state at the Pan-American Exposition in Buffalo, New York. He developed a distinctive flag to fly over each corner of the Ohio Building. The wool flags officially represented the Ohio Pan-American Exposition Commission rather than the state. On July 18, Governor George K. Nash visited the exposition, where he was presented with one of the flags, which is now held in the Ohio History Connection collections. Eisenmann secured a U.S. design patent for his design, which he described as "a triangular forked or swallow-tailed flag corresponding to the shape generally known as a 'cavalry-guidon' or 'broad pennant.'"

In 1902, State Representative William S. McKinnon, a member of the Ohio Pan-American Exposition Commission, introduced House Bill 213 designating Eisenmann's design as the official flag. It became law on May 9, making it the 20th U.S. state flag or banner. (Eisenmann had assigned his patent, which had a term of three and a half years, to the State of Ohio on April 24.)

The Ohio Building at the 1901 Pan-American Exposition

Because Eisenmann's design deviated from the "seal on a bedsheet" design then nearly universal among state flags, the press looked overseas for precedents: the layout was likened to either the flag of Cuba or of the Philippines, while the red and white annulus was derided for its similarity to the sun on the Japanese flag.

Initially, Ohio's flag was seldom used, in part due to the prevailing opinion that the Stars and Stripes should hold a monopoly on patriotic displays. Similar sentiment hindered the adoption of municipal flags in Cleveland and Cincinnati, to the extent that both were downplayed as mere "banners" for promotional purposes. In 1903, it was reported that, among state politicians, only Governor Nash displayed the guidon.

In the century following its adoption, the guidon gained significant popularity, being flown not only by the state but frequently also by its residents and businesses.

Find State of Ohio Flags in our store.